Dehumidifiers play a major role in controlling rust and corrosion that is prevalent in projects such as these. By controlling the relative humidity in the space, moisture that would normally form on all cold surfaces is minimized. When this moisture forms on any metal surface such as pipe galleries or chases, water holding tanks or in pump rooms rusting and corrosion is a constant housekeeping nightmare. Even though these surfaces may be coated with the best protective finishes known, rust and corrosion problems are not far behind.

When these two facilities were built, small portable dehumidifiers were specified. Over the years their reliability and cost of maintenance became a problem. Eventually, each facility had to have several back up dehumidifiers to serve while the primary units were down for maintenance. These portable units were not served by duct work so constant complete air circulation, in the space, was not consistent causing the sporadic control of relative humidity.

The Indianapolis office of HNTB was asked to analyze the situation and solve the problem. Their engineers concluded that larger central dehumidifiers, designed to be ducted, would be needed especially in the long pipe chases and galleries. DCA’s Indianapolis representative, having a long relationship with HNTB, was contacted and along with the DCA’s application engineers solved the problem. Several DCA3300T-LT, low temperature dehumidification systems along with several DCA1500T-LT units were selected. These are both designed to be ducted and operate in space temperatures as low as 60°F which is common in projects such as these. Well water is fairly constant in temperature year around so the relative requirement in the space increases during the warm months when the ambient relative humidity rises.

Need assistance with selecting a replacement dehumidifier for your existing system?

Check out our tool!

We’ve only looked at three common problems here, but there are a host of other issues that can cause dehumidifier malfunctioning.

To read more about what can go wrong with dehumidifiers and learn how to fix problems quickly and efficiently, download our free dehumidifier troubleshooting guide today. 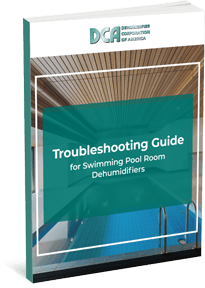 Looking for information about replacing your current dehumidifier unit? Check out our tool!

Find the Right Product for Your Application Using our Selection Software